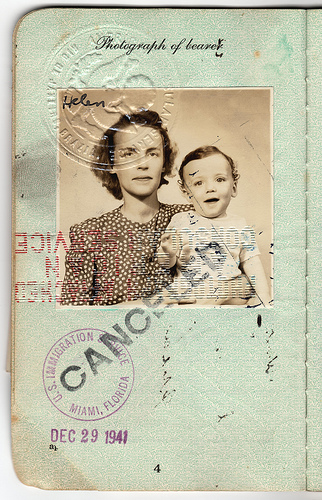 My mother is 29 in this photo. She’s holding my late brother, James, who is almost a year old.

I came across several of my late mother’s canceled passports recently. This is the most interesting one because of when and where it was issued: Rio de Janeiro, December 15, 1941.

My parents were living in Rio when Pearl Harbor was attacked. My father was a reporter for United Press, stationed in Rio.

I am guessing the declarations of war following Pearl Harbor promoted Mother to travel to the States with my brother ASAP in case subsequent wartime developments made travel to and from South America more difficult.

The passport has several interesting restrictions that reflect the unstable diplomatic and military situation in the late 30s and early 40s.

The first restriction, on Page 6, says:

"This passport is not valid for travel to or in any foreign state for the purpose of entering or serving in the armed forces of such a state."

The text is in red ink. It looks like it was part of the original passport rather than a stamp added after the passport was printed.

Until Pearl Harbor, the U.S. was officially neutral as to the conflicts in Europe and elsewhere in the world. Despite America’s neutrality, some U.S. citizens were volunteering to fight in other countries, Spain and Great Britain being two examples. The restriction quoted above was meant to deter volunteer soldiers and airmen.

(I understand Americans who wanted to fly against the Germans in the Battle of Britain in 1940 went to Canada first, and then to Great Britain. U.S. authorities at the Canadian border practically gave Americans wishing to enter into Canada the third degree in an attempt to stop would-be military volunteers, though I suspect single young men in their late teens and early twenties were probably singled out for scrutiny.)

The next restriction, which is stamped into the passport on Page 7 and takes up half a page, says the following in red capital letters:

"This passport is not valid for travel in any country outside the Western Hemisphere."

Basically, the Western Hemisphere is the Americas, small bits of Western Europe, bits of Russia, and various islands in the Pacific.

As a practical matter, this restriction prevented travel to the Axis countries – Germany, Italy and Japan – and occupied countries in Europe and Asia.

This restriction was stamped into the passport before the passport was issued in December, 1941. I am assuming the restriction was put in place only after Pearl Harbor, though it’s conceivable worsening diplomatic and military conditions in Europe and the Far East caused the State Department to prohibit travel to the Axis countries before the actual outbreak of war. I’m sure someone somewhere would know.

The final restriction appears in Page 11 of the passport. It was stamped into the passport when Mother renewed it in the U.S. in May, 1942, before returning to Brazil.

The renewal stamp says the passport "is not valid for travel in any country except:"

Below that, the clerk who issued the passport typed: "Brazil – Residence. Necessary countries en route."

What can we learn from all this? During a world war, the American government will severely limit civilian travel to foreign countries. That’s understandable.

THE JOURNEY HOME AND BACK

The passport also has interesting visas and other stamps that mark the waypoints on Mother’s journey to the US and back.

The dates of Mother’s various departures and arrivals along her route are so close together they indicate she traveled by air, probably via Pan American Airways. I’d be interested whether Pan Am used a flying boat or a DC-3 on the Rio – Miami route. Pan Am had both types of aircraft in service on that route in 1941.

December 19, 1941: Visa for Trinidad in transit to the United States of America, issued by British Passport Control, Rio, good for single journey only."

December 28, 1941: Entry permit, Trinidad "Permitted to land in TRINIDAD during Plane’s stay in Port and to proceed to from said Plane.

Finally, there are a series of stamps marking the steps on Mother’s return to Brazil in 1942.

May 29, 1942: Visa valid for single journey to Trinidad in transit, good for one month, issued by the British Vice Consulate in Miami, Florida.

May 30, 1942: Entry permit for Brazil as a permanent resident, Brazilian Consulate in Miami.

ps: My mother’s first name, as you can see on the photo, was Helen. I have photoshopped her middle and last names out of the image.

Terror suspect was beaten while in custody, lawyer says
Nasr's access to his attorney may indicate renewed Italian interest in pursuing charges against the 22 Americans. In the past few weeks, Egyptian authorities began questioning Nasr about his abduction at an Italian judge's request, said Zayat and Nasr …
Read more on MiamiHerald.com